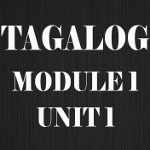 Pagbati at Pagpapakilala
Greetings and Introductions

Notes on the Conversation

Magandang is maganda (literally, “nice,” “pretty,” or “beautiful”) plus the linker –ng. One of the functions of a linker is to connect words which form phrases.

Po is a particle used in respectful address, roughly equivalent to “sir” or “ma’am.”

Kumusta, from the Spanish como está, means “How are you?”

Kayo, the plural form of ka (“you”), is used for politeness, even when addressing one person.

Si is used to mark the topic or subject of a sentence when it is someone’s name.

Kong is ko plus the linker –ng.

Din and naman both mean “also,” “too.” In expressions like Mabuti po naman, naman is used like “quite” or “pretty” in such English expressions as “quite well,” “pretty well/fine.

Nagagalak and ikinagagalak are two different verbs formed from the base galak (“happiness”).

Nagagalak akong makilala kayo means literally, “I am pleased that you are introduced.”

Ikinagagalak kong makilala kayo is literally, “That you are introduced pleases me.”

If you are ready, go on and study  Module 1 Unit 2 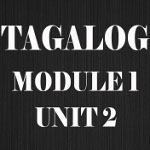 Sa Pilipinas
In the Philippines

Ipakilala (“to introduce”) and makilala (“to meet”) are formed from kilala (“acquaintance”).

Ang, usually translated as “the,” marks the topic of the sentence.

Mga (pronounced /manga/) is a particle placed before a noun to form the plural. It may be used with or without ang.

Sina is the plural of si (subject marker), used when referring to someone by name.

Nagagalak kami means “we are pleased.” Compare it with nagagalak ako, “I am pleased.” (Notice that the form of the verb does not change.)

Ninyo means “to you” or “by you.” Notice that in Gusto ba ninyo ang Pilipinas? ninyo means “by you” and ang Pilipinas is the topic, so a more literal translation might be “Is the Philippines liked by you?” Gusto is derived from Spanish and can mean “like,” “want,” or “would like.”

Ba is a particle used in “yes” or “no” questions.

Taga means “from” and refers to place of birth.

The Pilipino verb system does not have the same kind of tense distinctions as English. There are only three so-called “tenses” of a verb in Pilipino:

The rules for forming the imperfective depend on the prefix. Notice only that the imperfectives have syllables with an “n” and both repeat the first syllable of the base. Another example:

In Pilipino, the verb does not change whether the subject is singular or plural. Example:

(Bob is being introduced to Mr. and Mrs. Ramos.)

Rose, I would like to introduce to you my wife, Julie.

Juan, gusto kong ipakilala sa iyo si Bob, kaibigan ko.
Juan, I would like to introduce to you Bob, my friend.

Have you (sing.) been in the Philippines long?

Matagal ka na ba rito*?
Have you been here long?

Gaano katagal kayo sa Pilipinas?
How long have you (pl.) been in the Philippines?

Gaano katagal ka sa Pilipinas?
How long have you (sing.) been in the Philippines?

Apat na araw lamang ako rito.
I have been here only 4 days.

Labinsiyam na araw lamang ang** maybahay ko rito.
My wife has been here for only 19 days.

Labing-anim na araw lamang ako sa Olongapo.
I have been in Olongapo for only 16 days.

Hindi pa ako matagal dito, dalawang araw lamang.
I have not been here long, only 2 days.

Gusto mo ba ng* bir?
Would you like some beer?

Gusto ba ninyo ng kape?
Would you like some coffee?

Gusto ba ninyo ng alak?
Would you like an alcoholic drink?

Gusto mo ba ng gatas?
Would you like some milk?

Gusto mo ba ng tubig?
Would you like some water?

Gusto ba ninyo ng tsa?
Would you like some tea?

Gusto ba ninyo ng alak?
Would you like an alcoholic drink?

Ayoko po.
I don’t care for any.

Gusto mo ba ng bir?
Would you like some beer?

Taga-Michigan ako.
I am from Michigan.

Taga-Maynila po ba kayo?
Are you from Manila, sir?

Si John ito.
This is John.

If you are ready, go on and study  Module 1 Unit 3

Saan Kayo Nakatira?
Where Do You Live?

Mayroon is the same as may but usually used in responding to a may question.

Makapagtatagal means “to be able to stay longer.” This is the usual way to say you have to leave whether you’re visiting or run into someone on the street.

Tayong (tayo plus the linker –ng) means “we” (“you and I and others”); compare it with kami (“I and someone else or others, but not you”). Pilipino makes a distinction between “we” when the person being addressed is included (tayo) or excluded (kami).

Paalam is the formal “good-bye,” and is used by the person who leaves first. More commonly used terms, such as “0, sige na” or “Hanggang bukas,” will also be heard.

Adiyos (“good-bye”) is used as a response to paalam.

May anak ka ba?
Do you have children?

May anak ba kayo?
Do you have children?

Wala. Wala kaming anak.
No, we don’t. We don’t have children.

May anak na babae ka ba?
Do you have [any] daughters?

Wala akong anak na babae.
I don’t have [any] daughters.

May anak na lalaki ba kayo?
Do you have [any] sons?

Wala kaming anak na lalaki.
We don’t have [any] sons.

Wala. Mayroon kaming anak na babae lamang.
No, we don’t. We have daughters only.

May asawa ba kayo?
Do you have a spouse? [Are you married?]

If you are ready, go on and study Module 2 Unit 1 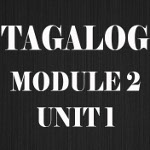 Paano po ba ang pagpunta sa istasyon ng bus?
How Does One Get to the Bus Station?

Mamà is a polite term used to address a man whose name you don’t know. Notice that the mark over the “a” indicates that the vowel is cut short or stopped; it is not a stress mark.

Maaari is sometimes used instead of puwede. Both mean “can” or “may.”

Kantong is kanto (“corner”) plus the linker -ng.

Pakiulit is paki (prefix for polite request) and ulit (“to repeat”)–“Please, repeat.”

Hanggang means “until,” “as far as,” or “to.” Hanggang bukas, “until tomorrow,” is commonly used when parting from someone you expect to see the next day.

Dyip (“jeepney”) is an ornately decorated, elongated jeep used as a jitney. Jeepneys have routes like buses, but except in Manila do not have regular stops; the driver will stop whenever requested. You just say Para po!; the destination is painted on the side. In some places the jeepneys are also color and number coded.

Magdyip means “to take a jeepney.” Mag added to a noun changes it to a verb; for example, asawa – “spouse”; mag-asawa – to get married.” Mag is often used with foreign words: mag sweater – “to put on/wear a sweater”; magbus – “to take/ride a bus.”

One pronoun in Pilipino may have several meanings in English, as you saw in the examples Sa kaliwa mo, “on your left,” and Makikita mo” “you will see.”

Different pronouns in Pilipino may have only one English equivalent; for example, asawa ko and aking asawa both mean “my spouse.”

Every pronoun in Pilipino has three forms, classified as the ang, ng, and sa forms. The form of the pronoun often depends on its position In the sentence.

Mga disisiyete kilometro hanggang doon.*
About seventeen kilometers to there. 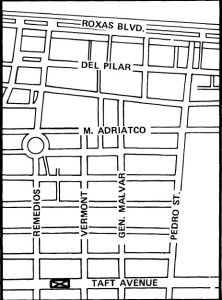 If you are ready, go on and study Module 2 Unit 2 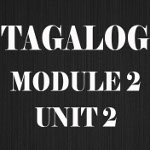 Sa Takilya
At the Ticket Window

Aalis means “will leave/will depart.”
(Ang marks the topic of a sentence, so ang alis means “the departure.”)

Sa marks the directional focus. It may be translated as “in,” “at,” “to,” or “from” and may be preceded by a more specific preposition; e.g., para sa maynila, “for Manila,” mula sa Maynila, “from Manila.” Notice that sa is also used for time: “at seven o’clock” sa alas siyete.

Nga is equivalent to “please”; nga po is the polite form.

Dating is “arrival.” (Ang dating, “the arrival”; darating, “will arrive.”)

Maraming is marami (“plenty”) with the linker -ng.

Anong oras ang dating?
What is the arrival time?

Anong oras ang alis?
What time is the departure?

Kailan ang alis ng lantsa para sa Corregidor?
When is the departure of the launch for Corregidor?

Anong oras ang dating ng kotse mula sa Manila Hotel?
What time is the arrival of the car from the Manila Hotel?

Anong oras ang alis ng eroplano mula sa Maynila?
What time is the departure of the airplane from Manila?

Exercise 23. write the numbers you hear.

Exercise 26. Write the prices you hear.

If you are ready, go on and study Module 2 Unit 3 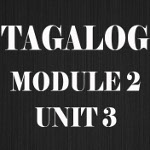 Sa Gasolinahan
At the Gas Station

Palagay means “to think” or “assume.”

Maaayos (from maayos) is “to put in order” or “to fix.” The first syllable of the base (ayos) is duplicated for the future or contemplated aspect.

Dadalhin is “will bring” from dalhin (“to bring”).

Rin (after vowels) or din (after consonants) is “also.”

Tumawag is “call” on the telephone.

Bandang is banda (“around” or “toward”) with the linker -ng.

Hindi maaari. Marami pa akong trabaho.
No, I can’t. I have a lot of work.

Pumutok ang goma ko. Puwede bang kumpunihin mo ngayon?
I have a flat tire**. Can you fix it now?

If you are ready, go on and study Module 3 Unit 1