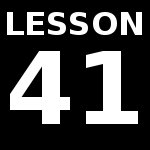 Hooray for you!  Moving on again, this time to Lesson 41. In Lesson 41, it will be exciting for you, because again we are moving in to something brand new for you!  Pag infinite, Pag gerund and Pag Noun Makers.  Lots of “Pag” but a little different than the “Pag” that you have used on earlier […]
To access this post, you must purchase Learn Bisaya with our Bisaya Buddy Course.